The Future of Solar Energy

After flying through our 2022 price target, one of our long-term green energy picks is ready to take it to the next level

They posted strong margins and revenue growth for the back half of 2022, and it looks like they are only set to accelerate afterward.

With capital flows continuing to change for what appears to be the more medium-term, mid-tier growth picks like First Solar are getting a lot of attention from bigger investors too.

So let's do a quick update here and talk about the ever-accelerating solar revolution and how the team at First Solar can keep gobbling up market share.

The bear market isn’t entirely gone yet folks, boring is still beautiful in this market. Let’s take a quick look at the details below 👇

First off, First Solar is absolutely soaring on the back of the Inflation Reduction Act.

Since our last update, FSLR upped their 2022 guidance to 9.4 gigawatts of shipments to customers.

This is a huge increase that came at a little bit more of a cost to the stock, but with tax breaks on the horizon -- this is the exact time to turn FSLR into a cash volcano.

Furthermore, First Solar finally has a location for its massive $1.1 Billion factory.

They'll be building the future of solar in Lawrence County, Alabama. This came with an $85 million upgrade to their main facility in Ohio as well as a $270 million R&D facility in Perrysburg Ohio.

First Solar has clearly been ready for something like the Inflation Reduction Act for a while because they are developing fast on the heels of proposed tax breaks that will help the solar industry go toe-to-toe with hydrocarbons across the next 5 years. 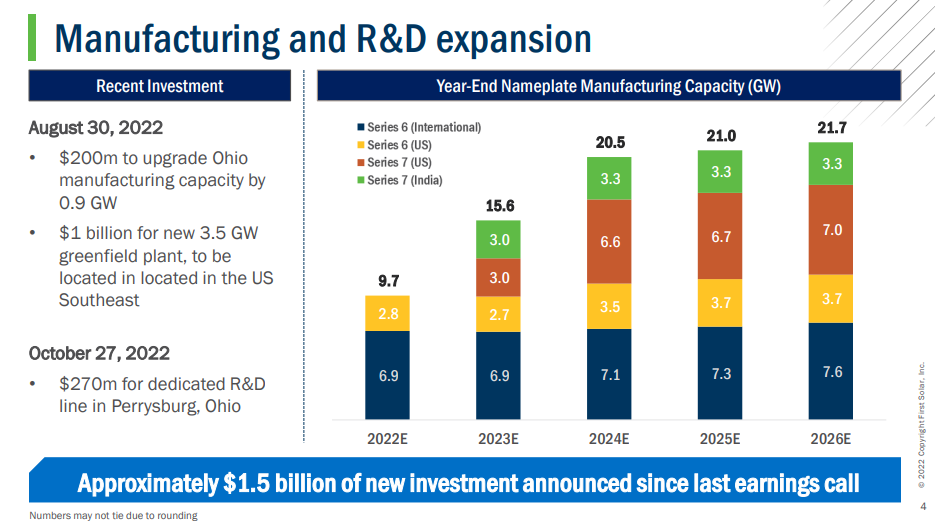 The goal here is to use US tax breaks to achieve worldwide dominance -- which is something we're already seeing with their plans for 2023.

We're seeing massive manufacturing expansions in Europe on the heels of increased solar demand thanks to the mayhem caused by oil and natural gas last year. Furthermore, FSLR is adding manufacturing capabilities in India as well.

FSLR is doubling down on R&D and simultaneously doubling its shipments year-over-year: 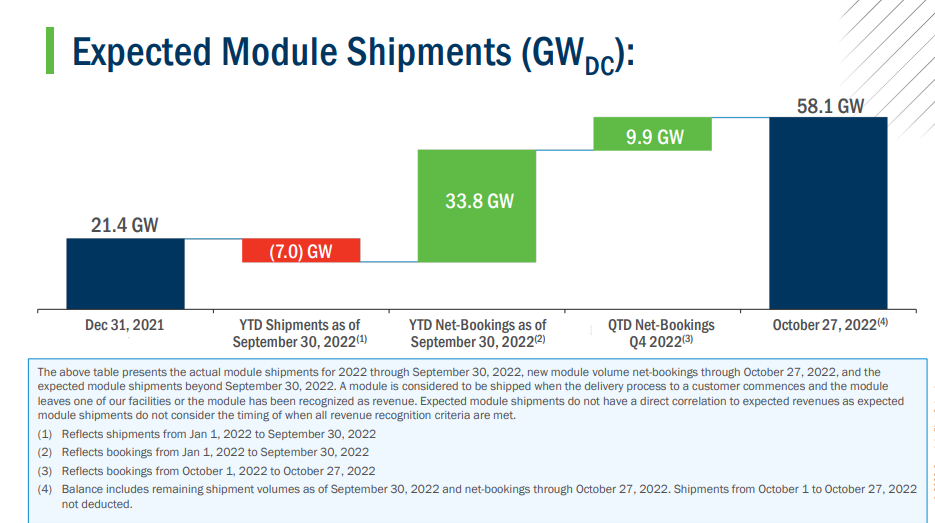 All-in-all, this is an expensive time to be in the solar business, but FSLR has shown they can expand in the right way and absolutely explode off of the more generous tier of the IRA's tax breaks.

While this came at a cost for their Q3 earnings this year, the market still rewarded FSLR for being really aggressive in their expansion play.

The goal here is to establish enough of an international moat that First Solar is hard to catch and their earnings/the market's expectations seem to be lining up nicely with that goal!

A massive part of our thesis moving forward is $FSLR also using its American advantages to massively expand its pipeline. F

irst Solar is in a classic startup position where its deals very much outweigh its manufacturing capacity.

However, ahead of their huge Alabama plant, upgrades to their Ohio facilities and completion of their first plant in India are going to help boost them past 30% growth in manufacturing capacity.

Let's look at that bookings chart from earlier:

Series 7 in India instantly gets FSLR to a 30% increase in manufacturing capacity. This, combined with all the mid-to-late stage deals the company has secured in India gives them the opportunity to essentially become an international cash volcano.

What's more exciting from our perspective is the growing demand in the EU for Solar Power over conventional electricity.

Obviously, traditional power became wildly expensive in the Eurozone thanks to the economic portion of Russia's invasion of Ukraine. Since then, gobs of investment have been poured into Solar by various EU members: 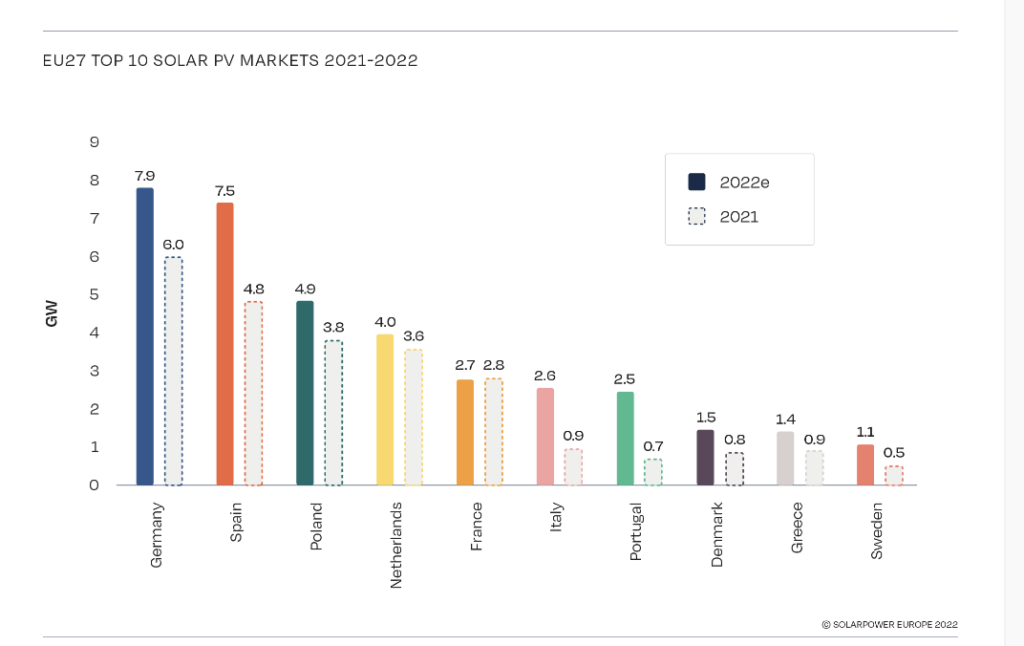 This demand is only going to increase and with First Solar's manufacturing base expanding and their tax burden decreasing at the exact right time -- they have the best chance to take on a huge amount of that market by out-building and undercutting competitors.

We could not be more excited about that international expansion.

We still like FSLR as a long-term "narrative" play and that's basically because First Solar has the opportunity to succeed regardless of the economic environment.

If we avoid a full-blown recession and material costs keep coming down, FSLR will be able to afford a spicier valuation and will absolutely rip on that news.

Meanwhile, with increased demand from Europe and energy being one of the primary costs people have to deal with -- FSLR can achieve modest growth even with Jerome Powell plunging us into a full-on recession.

We like option 1 better because stocks like FSLR will become borderline growth plays -- but we hold onto option 2 to de-risk our position a bit.

First Solar is in the middle of a strong product development cycle that can get supercharged by cheap money coming in from the government.

It's utilities and large infrastructure companies who win the most in environments like this and that's why we're really excited to see First Solar pull off forward-looking exponential growth here.