How This Company Will Dominate the DNA Market

After a year of refusing to miss, Moby's pharma guy is back with one last Biotech pick to watch.

Biotech is a risky space, so bear markets can be a great time to see who's real and who's fake.

And one of the biggest players of the next ten years just revealed itself: We're talking about gene-sequencing darling Illumina ($ILMN).

Illumina's stock has gotten hammered in the last year, falling ~70% from the height of bull-run mania last August.

And that's because Illumina looked like a riskier play this year. They are trying to corner the gene sequencing market with a range of devices that clinical, tech, and academic clients can use to sequence human genomes.

But at their investor day last month, Illumina revealed their next-gen gene sequencing machines that will get the cost of turning a whole DNA set into actionable data down to around $200 per genome. That increase in speed and throughput is astounding! And for us, it demonstrates how thoroughly Illumina is trying to corner the DNA market over the next 5 years.

There are some complications too -- a spooky antitrust lawsuit is looming large over Illumina's prospects and competition from China is finally edging its way in.

But Illumina just completely changed the game for a really large part of the Biotech industry, and their business is set to absolutely skyrocket.

Let's explore the details below 👇

One of the greatest scientific achievements of the last 50 years was sequencing the human genome -- that is, taking all the genetic letters in a single person's DNA and digitizing them so scientists could actually study the information in there.

The first genome to ever be sequenced cost about ~3 Billion Dollars.

And since then, biotech companies have been innovating like crazy to get the cost down.

That's been one of the core missions of Illumina since its launch. Their core product line is a series of genetic sequencers that allow clinics to digitize DNA on the cheap. Illumina originally rose to prominence being the 3rd stage company that drove the cost of sequencing DNA down from $10,000 a pop to $600.

Being kings of the gene scene was good enough to get Illumina's stock all the way to the mid $500 range by mid-last year. But then they got hit by just about every bad tailwind at once:

These two headwinds combined with the fact that Illumina potentially overpaid for Grail back in 2021, tanked the stock outright.

But these are the kinds of opportunities we like to see, because Illumina has managed to maintain 20% margins on a very expensive product line. Their gross margins in Q2 topped 68%. And they have a lot of margin they can eat into in order to stay competitive.

So, rather than let this last bear year slow them down, Illumina pushed product development to new theoretical limits -- which brings us to the core leg of our bull thesis.

Illumina's Investor Day this year was all about their high-throughput next-gen sequencers that can get the cost of sequencing down to $300-per-genome. That's 50% down from Illumina's previous records and a 10,000,000% reduction in cost over the last 30 years.

While these sequencers aren't cheap, they are going to help Illumina unlock whole new sectors of profitability in biotech. We need to sequence DNA on the individual level because every single person has their own unique mix of genes that interact differently and require fine-tuning to treat and diagnose issues.

And because of that very fact, Illumina's TAM has grown a lot: 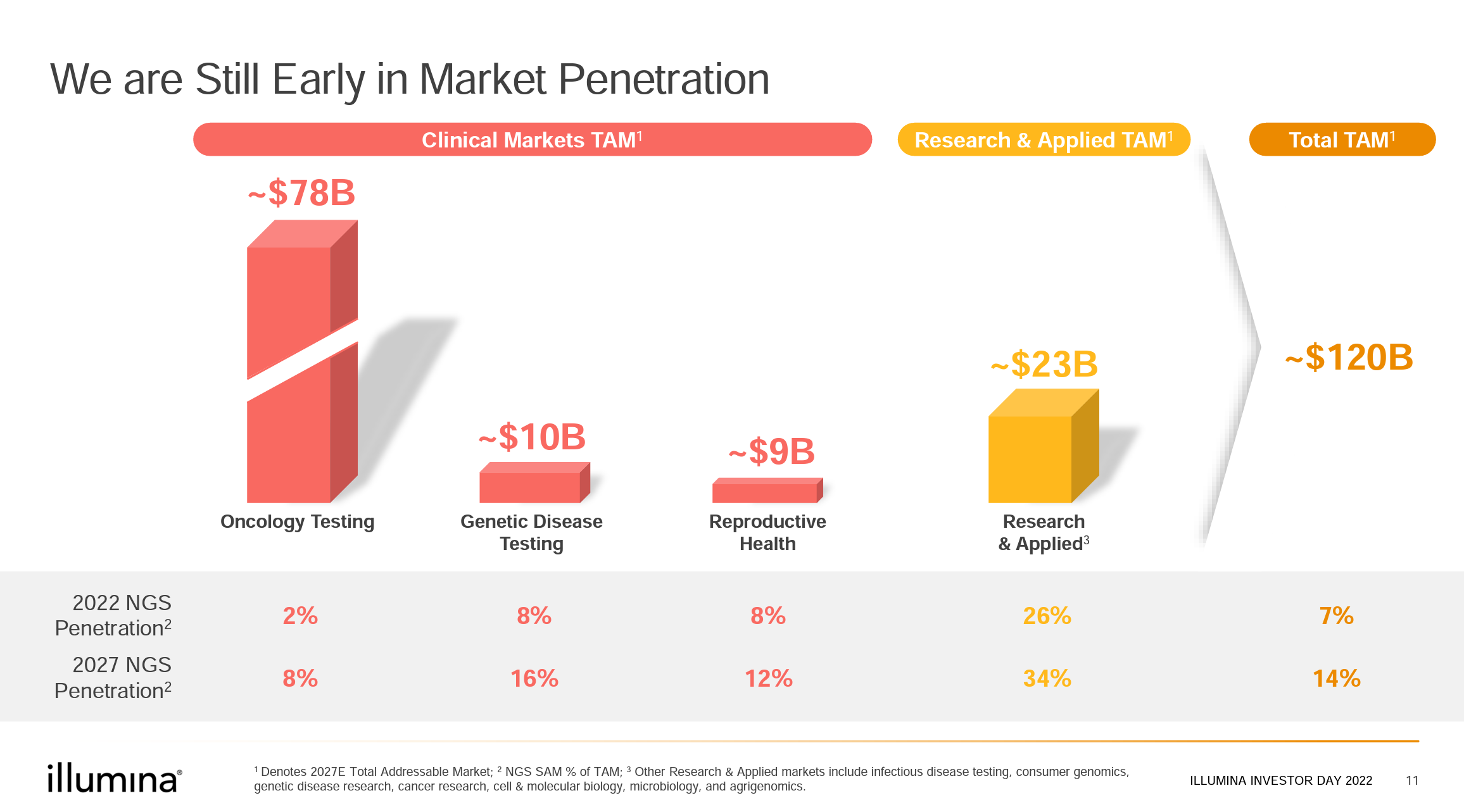 The main innovation is that Illumina's new sequencers make them economical for a lot of different clinical applications.

Let's double-click into that oncology testing line--because it honestly looks optimistic to the point of being made up, right? Not really.

Baby Boomers are the largest generation in history--and they are aging into the prime risk age for cancer. The flood of demand for Oncology in the next 15 years is really hard to wrap your head around. There is an estimate that cancer diagnoses will skyrocket 67% in the next 8 years alone. Cancer diagnoses are already on a rapid rise thanks to a rapidly aging population--and some surprising increases in cancer rates for folks under 50.

Full genome testing is gigantic for doctors trying to both prevent and treat cancer--as there are so many different types of cancers that straight-up old-school pathology have a hard time keeping up. Taking the genome of the tumor tells a doctor exactly what they're dealing with and massively simplifies the treatment plan. Thing is, despite the fact that demand for genomic testing is on the rise, there's no economic way to get it to most consumers and insurance plans.

Until these high-throughput models from Illumina drop. $300/ genome is right in the range of profitability for labs and hospitals to start widespread utilization of genomic testing.

And as cancer rates increase--that demand is only going up more and more.

And this isn't even Illumina reducing the price of their machines, it's making larger sequencers that can handle an astoundingly high throughput of genetic information. This just makes Illumina a profitable tool for large clinical providers. The bulk of their revenue by 2030 will be a mix of hospital networks and 3rd party genome labs that serve a wide area.

These new machines are part of a whole line slated to get a per-genome cost of reading DNA down to ~$240 by 2023. And Illumina's not even taking their foot off the gas.

This opportunity can allow Illumina to grow and maintain its margins -- even with the threat of similarly cheap sequencers potentially on the horizon for late 2023.

While Illumina is technically under threat from increased competition, there is no greater business asset than a well-funded competitor to help you develop your market.

Biotech is going to be a massive battleground between US and Chinese companies for the next 50 years and Illumina will be a cornerstone of the gene-sequencing pillar of that market.

We like watching this stock make moves into clinical--and now we're hunting for news about any potential partnerships Illumina may forge with a large insurer or healthcare provider. That will cement Illumina as the clinical standard while their competition fights over scraps in the research and tech markets.

With plenty of room in their margins and a product team pushing the physical limits of reality, we could not be more excited for this stock.