Should You Buy Nintendo Stock?

This week we're on a little gaming kick while earnings season gives us a better sense of where the year will take us.

The entire gaming industry relies on complex development cycles -- all of which were heavily disrupted by worldwide lockdowns and a confusing/ disjointed return-to-office process over the last 18 months. Because of that, 2023 is turning into a huge year while the AAA gaming industry returns to normal.

One of the biggest beneficiaries of that is going to be Nintendo ($NTDOY or TSE: 7974) as they shake off a mediocre 2022 by gearing up for massively increased software sales and a huge long-term shot down the field.

Nintendo is a bit out of phase with the rest of the gaming industry. Their Switch console was released before Microsoft and Sony's next-gen offerings and therefore they are about to kick off the next phase of the console wars with the Switch's successor coming as early as 2024.

Because of this, while the gaming divisions at MSFT and Sony are soaring, Nintendo has been lagging behind with Switch sales on the decline.

This hasn't killed the stock though and we're really excited to see software pick up the slack in 2023 as Nintendo gears up to use being out-of-phase to their advantage and release a successor to the Switch potentially as early as 2024.

There's a good bit to cover here, so let's go full geek on this one  👇

We probably don't have to go super in-depth on this one, right?

Recently, Nintendo has spent the last 6 years riding high off their Nintendo Switch console -- which is the 5th best-selling video game platform of all time.

However, the Switch is clearly reaching the end of its lifecycle with total units sold declining significantly from 2021 to 2022.

Those declines are expected to accelerate going into 2023 from around 23 million to as low as 19 million.

Video Gaming is a tough business that requires you to always be the newest, best thing. The Switch was huge as it beat Microsoft and Sony to the next stage of the console wars by 3 years and completely avoided the chaos of trying to launch a new console in the middle of a global pandemic and semiconductor shortage.

However, Nintendo is very much feeling the stale energy here with their stock essentially floundering through all of 2022.

And when you look at Switch sales projections from Nintendo and how they are promoting their 2023 slate of software -- you start to notice a familiar pattern.

Nintendo is not promoting a lot of new software titles expected in 2024 just yet. Every time Nintendo does this, it's because they allow a brief year of overlap where their main AAA titles will be dual-released for their current-gen and next-gen console offerings.

So long term, our price target is dependent on an as-yet-unannounced future console from Nintendo.

The pattern lines up and 2024 will be a killer year to be the only major games company to be releasing a new console.

But a long-term price target based on industry patterns backed up by rumors is not even close enough to waste your money investing on.

So what's the short-term look here? Is there any point in jumping on the Nintendo train right now?

Software is All You Need:

The short answer is yes. Mainly because Switch sales were not the only reason Nintendo lagged in 2022.

As we discussed in our article on Tencent earlier this week, it's been a very tumultuous decade for AAA gaming.

This led to a lot of delays that are only being resolved this year. Nintendo is slated for quite a few releases in the first half of 2023 but the big one is their follow-up to The Legend of Zelda: Breath of the Wild.

BOTW was largely responsible for how successful the Switch was in the first place, selling nearly 30 million copies in total.

The sequel, The Legend of Zelda: Tears of the Kingdom, is expected to perform just as well when it comes out in May, but with a lot of those sales being front-loaded in 2023.

In addition, There's a slew of popular franchises with games coming out for the first time in a few years like Fire Emblem, Bayonetta, and Pikmin.

While these don't have the top-tier appeal that Zelda does, all three of them landing in 2023 should help Nintendo top 242 million units sold -- which would top last year's ~235 million software units sold handily.

With the potential that Nintendo will announce the long-delayed Metroid Prime 4 as a late 2023 release, those numbers look like a layup Nintendo can readily hit.

242 million units sold is nifty, but when you take into account that most of these would be more expensive AAA titles, you begin to see where our bullish sentiment is coming from.

Software in this era is also way more profitable than actual consoles since most consumers opt for digital copies of games out of convenience.

Factoring all that in, we're expecting Nintendo's operating profit to top 605 Billion Yen, which would be a solid increase from last year's 592 Billion.

A huge driver of that, and a big part of our bullish thesis, are margin-heavy add-ons to already-finished games: 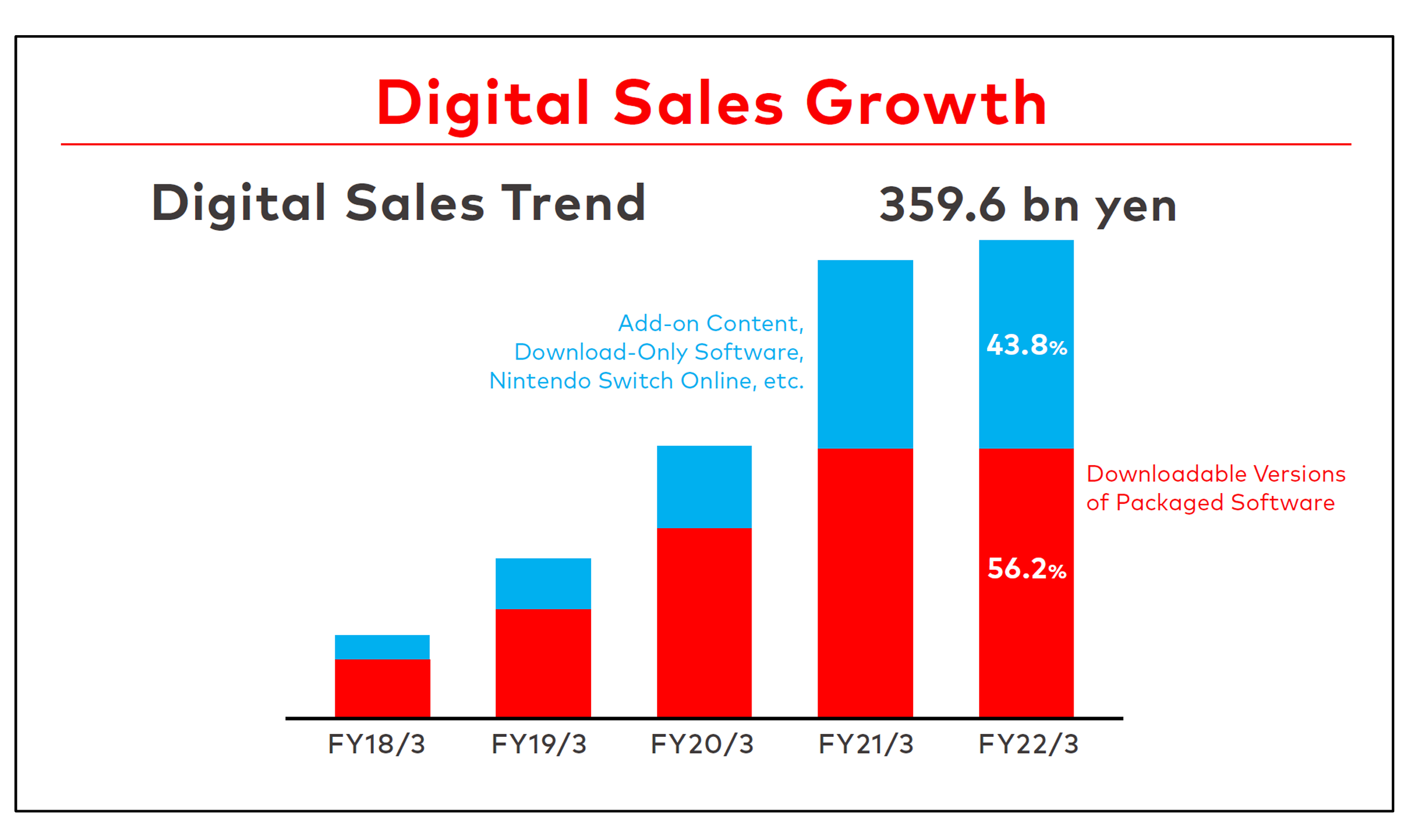 Nintendo's entire MO is perfection. Mario Kart 8 was released in 2014 and Nintendo is still printing money off of new add-ons to their Switch port of the game.

Add-ons are great because they can add as much as 50% to the bottom line of a game with only 10% of the development hit. Nintendo doesn't release nearly as much as other platforms -- but all their releases are designed to have this level of staying power.

That perfection and staying power is a big part of our software sales growth thesis because of how remarkably sticky the Switch is despite being so late in its lifetime: 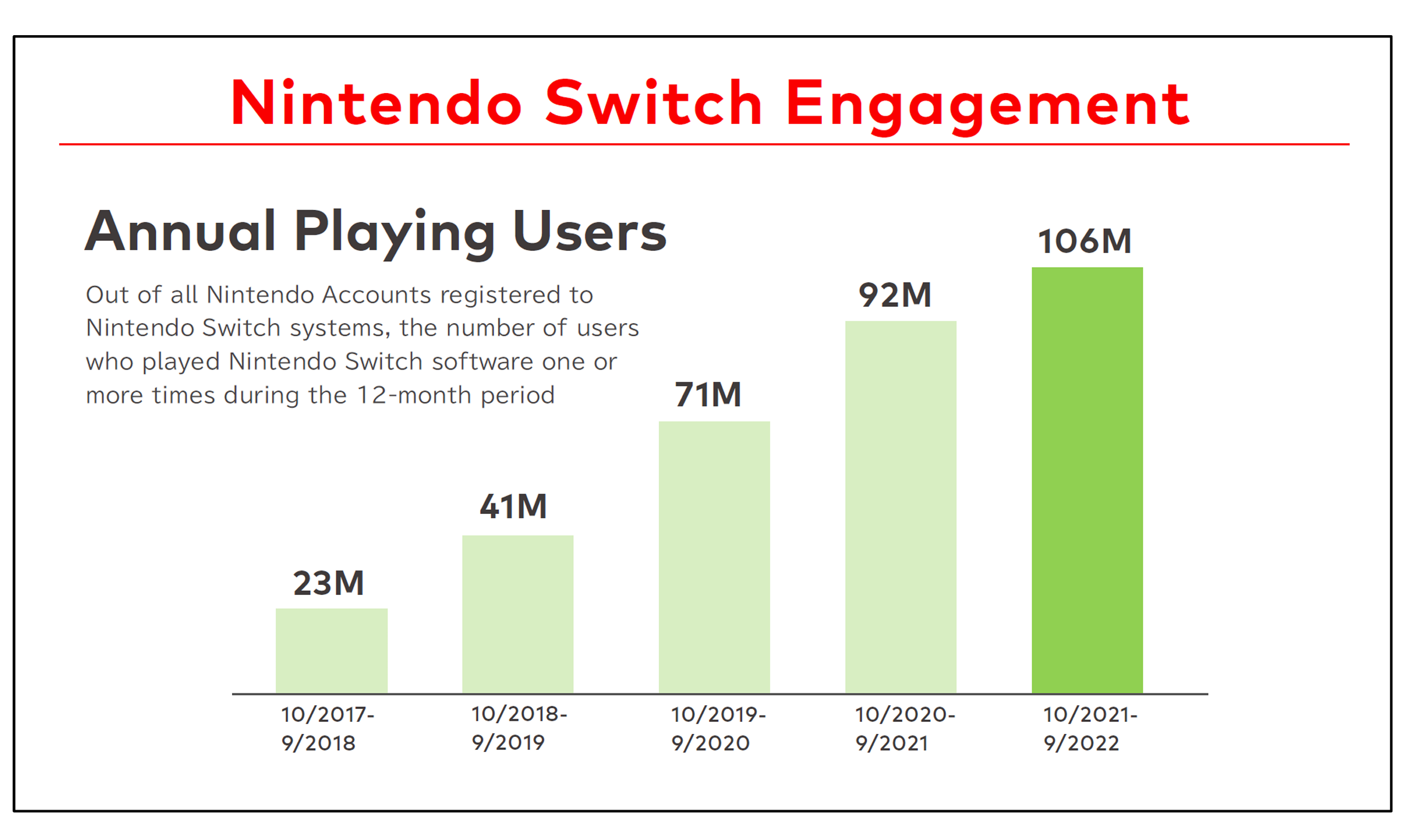 A dedicated player base that massive get Nintendo to our more bullish revenue thesis even with declining Switch sales.

It's more than enough to drive short-term investment while we hold Nintendo stock for the medium term in anticipation of a new console announcement for 2024.

Long term, it's easy to bet on the once-and-future king of gaming.

This is a high-stakes, high-reward business that requires investors to have really long time horizons. This software-heavy year after the pandemic looks like just the right time to jump on the Nintendo train before the 2023 hype cycle in video games starts and we begin to get more tangible news about 2024 and beyond for Nintendo.

Their software will be the biggest driver here, but we're also really excited to see how Nintendo continues to develop its Nintendo Online subscription product. Recurring revenue from there may increase with all the new software titles being released this year.

All-in-all, Nintendo is in a strong position for the next 5 years even if we're a bit early on with this pick.

We'll keep you updated as their console ambitions become clearer and more confirmed.