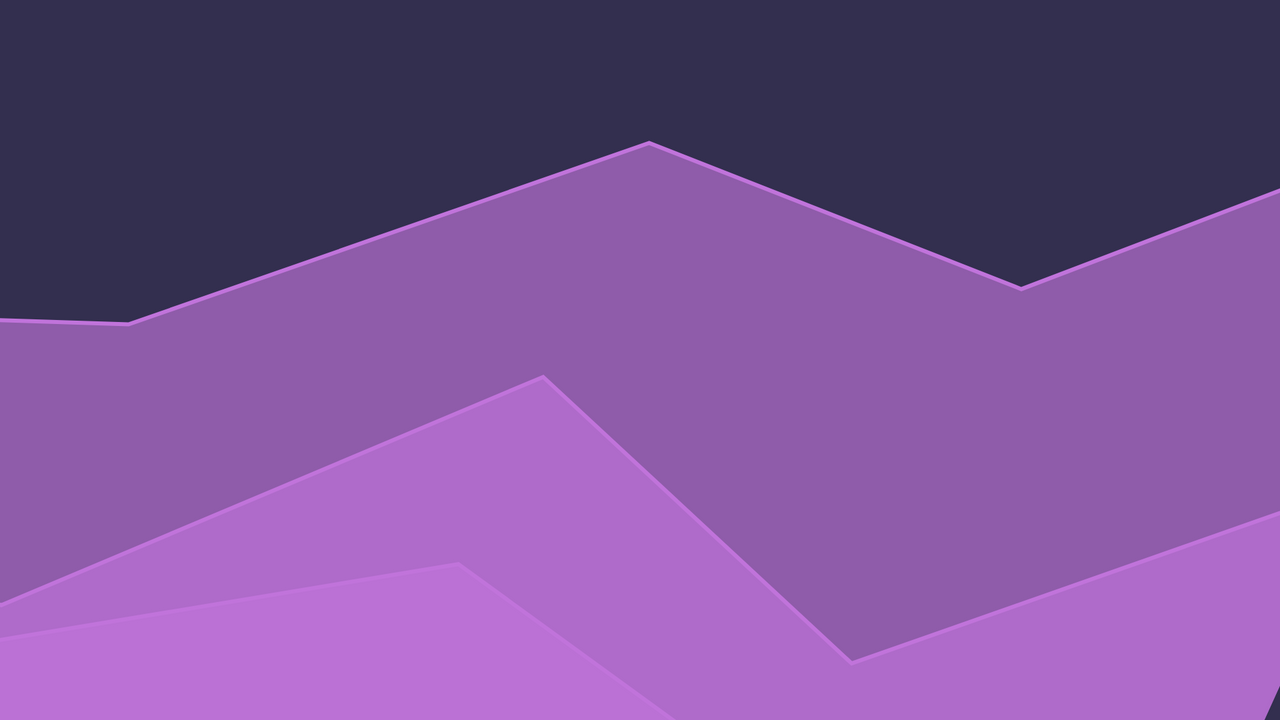 Last week, our analysts took you through one of the long-term narratives we see emerging in this new economy via our Lockheed Martin update.

These long term narratives take a long time to research and game out, so naturally we were pretty excited at the end of last week when one just dropped into our lap basically out of nowhere.

Against a backdrop of polarization, gridlock and generally bad vibes—the US Congress found a way to actually pass the Inflation Reduction Act—which Joe Biden signed into law earlier this week.

It's not a perfect bill, but it's still massive in that it's extremely incentive-heavy for green tech that can help reduce our carbon burden.

A lot of different technologies are being given subsidies in the bill—but none of them are quite as per-capita massive as the credits being offered to the Green Hydrogen industry.

So you already know what we're talking about: let's update you on how this completely changes the timetable for one of our longest-held positions: Plug Power.

The short of it is simple, the Inflation Reduction Act speeds up Plug Power's path to dominance by about a decade, and 3x's the number of industries PLUG can now profitably target with green hydrogen.

There's a lot more detail to cover here, so let's just jump into the details 👇

We've been covering PLUG since September 2020, and the stock has behaved like most growth plays through this genuinely weird period of the market. With supply chains and inflation weighing down Plug Power's path to profitability, we recently adjusted our price target to reflect slower growth during 2022.

If you're new to Moby.co, Plug Power is a Green Hydrogen producer with hydrogen plants all over the US and an expanding presence in Europe. They're best known for producing fuel cells, backup powerplants and systems that allow delivery vehicles and forklifts to be run entirely off of Hydrogen. It's a slick concept that will be a really important component of a new energy grid moving forward.

But, making hydrogen with renewable energy is extremely expensive, and therefore we've always held the stock as a long-term play while the company grew, brought production costs down and expanded how much green hydrogen it produces in the first place.

Plug Power's most recent earnings call lined up with those expectations and the market initially had a fairly sleepy reaction to them.

And then, not even 48 hours later, Congress flipped the table and sent PLUG's stock screaming past our Q1 2023 price target.

That buy pressure has cooled off since the initial reaction thankfully. So, we can go over the fundamentals about how the Inflation Reduction Act sends Plug Power into hyperdrive.

Hydrogen is SO HOT Right Now:

Here's the headline: for companies that produce green hydrogen and meet certain labor requirements, the US government will provide between a tax credit between $.60 and $3.00 per kilogram of green hydrogen produced.

This is honestly on the smaller side compared to other investments the government is making with the IRA, but since green hydrogen is such a new industry, it completely changes the game.

Right now, depending on the renewable energy source, it costs anywhere between ~$4.00—$6.50 per kilogram to electrolyze H2 gas.

So yea, congress just went and made it cost anywhere from 10 to 50% cheaper to make this stuff—massively expanding potential margins and giving SO MUCH leeway for new capital to enter the space. PLUG is the most robustly positioned company to take advantage of this right now.

But a better way to look at this is how PLUG views their breakeven costs on an industry-by-industry basis. A diverse client list gives PLUG sustainable long-term growth, while relying on too few industries opens them up to risk and drives capital away.

But hydrogen is a viable fuel in so many other industries—just industries where green hydrogen is too expensive to be considered.

Until now. Here's how these tax credits open up the market for PLUG: 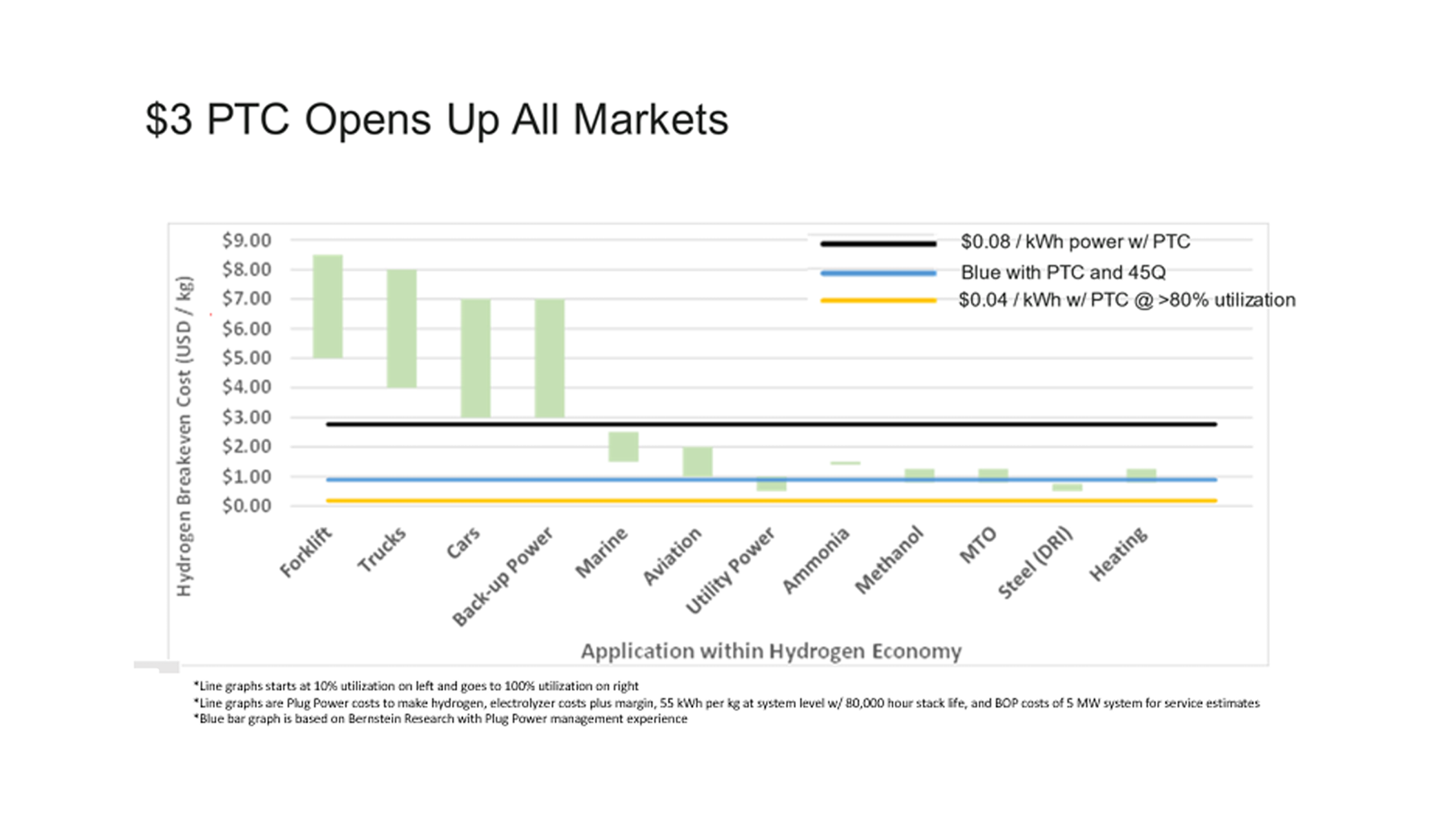 Without these credits, PLUG already has a strong path to profitability in it's 4 key industries. With these tax credits, green hydrogen instantly hits it's breakeven targets there. And it opens up areas Plug Power has already been developing. Using hydrogen fuel cells in Marine and Aviation applications is pretty cool and we've actually covered how Plug Power can bring a lot to the table in that space in this old video:

But a lot of those industries still require a lot of development before they become big revenue drivers. The big one for us is ammonia.

Why, you ask? Stick with me for a quick science moment:

Ammonia is basically the most important chemical we manufacture as a species right now. We need nitrogen to grow all our food (and like, not starve to death.) The earth has a LOT of nitrogen (3/4's of every breath you take is made of the stuff) but it's really hard to turn into biologically useful compounds without a lot of energy. Nature has it's methods for making nitrogen into useful stuff—but those processes are slow and unreliable. Therefore, naturally made fertilizers have a cap on how many crops we can grow. Therefore, despite all the land and delicious plants industrialized farming can produce, there was a hard ceiling on how many people our biosphere could support.

That is, until a German scientist figured out how to industrially convert the nitrogen in our air into ammonia—and exponentially increased our planet's carrying capacity. There are several billion people on earth right now who only could be here because of the industrial production of fertilizers. You're probably one of them.

So yea—the tech for making ammonia is super important and relies on fossil fuels. But that tech has been refined over the course of 130-ish years, so it's reliable and easy to work with.

And therefore simple enough to swap power sources. A fuel cell on a plane connected to a big'ol hydrogen tank has a lot of complications from having to like, fly and all that.

But ammonia plants are just big tanks sitting next to power plants. As long as you have enough energy to make those tanks really hot and really high pressure, you're golden.

Since it takes a LOT of energy to do that, Green hydrogen (heck, even MOST renewable energy sources) has really thin profit margins. Margins that PLUG now has a decent shot of hitting if they can keep reducing their production costs and get a solid slice of those hydrogen tax credits.

There are hundreds of Ammonia plants worldwide, so this is a real low-hanging fruit for the management team considering the large revenue base this could bring in.

The biggest question mark for Plug Power is how fast they can jump on these reduced costs. PLUG is currently aiming at producing ~70 tons-per-day (TPD) of green hydrogen by the end of the year. They only will win if they can reliably expand that at an accelerating rate. These hydrogen subsidies can give PLUG the capital they need to go real big, real fast and establish an unassailable dominance over the market.

We need to get those numbers way up, and way more worldwide to win this market. But in their recent earnings call—PLUG hinted they could now hit profitability by 2025. Which is even more exciting.

The hydrogen industry is about to become VERY competitive with subsidies as attractive as the ones just passed by congress. Plug Power is in the perfect position at the perfect time. They've proven 4 industries can be profitable revenue sources, and their learnings can make development for 8 more much cheaper and faster. Their broad presence in the US and Europe gives them a diverse base of revenue that can expand very quickly to give them the edge they need to be unbeatable.

We're keeping our short-term price target a little slow here to account for volatility, but this is a strong 5-10 year hold here for the analysts at Moby.co. We're really excited to see how PLUG performs with new competitors entering the space, and we're even more excited to see how far they can take this thing.