Is Rivian Stock A Buy?

We're back again revisiting the EV space after a brutal 2022. Back in December, we gave you our take on where Tesla is going in 2023 (read that here) and after combing through our EV portfolio we've landed on Rivian being the next company we bring back to you.

Rivian's had a real tough road since their IPO at the worst possible time in late 2021. However, a lot of the pain at RIVN is only being caused by the stock getting overbought at the peak of EV mania before inflation really set in. After that, they set sky-high expectations they simply could not meet as supply chains spent all of last year being completely messed up.

But, if you look past the pain and towards the actual growth Rivian achieved during this time period--there's a really solid business here underneath all that hype falling flat.

Rivian managed to pull off consistent quarter-over-quarter growth in production and deliveries last year--with Q4 numbers coming in 550% above Q1. If Rivian was working with normal expectations--they would be soaring right now off of that solid growth alone.

At the same time, Rivian has consistently missed estimates for deliveries every quarter--which is why the stock keeps getting pushed lower and lower.

However, in Rivian's last delivery estimate and last year's Q3 earnings--we saw a top-tier company with a supply chain and production system robust enough to weather the approaching macroeconomic storm (should a full-blown recession materialize like everyone's been predicting.) Rivian has the growth, the cash flow, and the capital necessary to make it to the next level--and missing these estimates simply creates a buying opportunity that's a little too good to pass up.

So let's take a quick look under the hood at RIVN and see where they can pull off some solid growth in 2023 before going full lightning mode in 2024. Like all EV plays, the numbers are pretty compact here, so we'll make this one quick 👇

The main reason Rivian has fallen as hard as it did was a macro environment that hamstrung production. Rivian soared to a truly wild valuation after their IPO in 2021--which almost instantly sputtered as the music stopped on 2021 mania and the harsh inflationary reality set in.

Literally an IPO 3 years earlier or 3 years later puts Rivian in a bullet-proof position. But we're not here to make excuses, we're here to make investments.

So, regardless of falling flat on expectations, Rivian managed to grow their deliveries well enough during 2022: 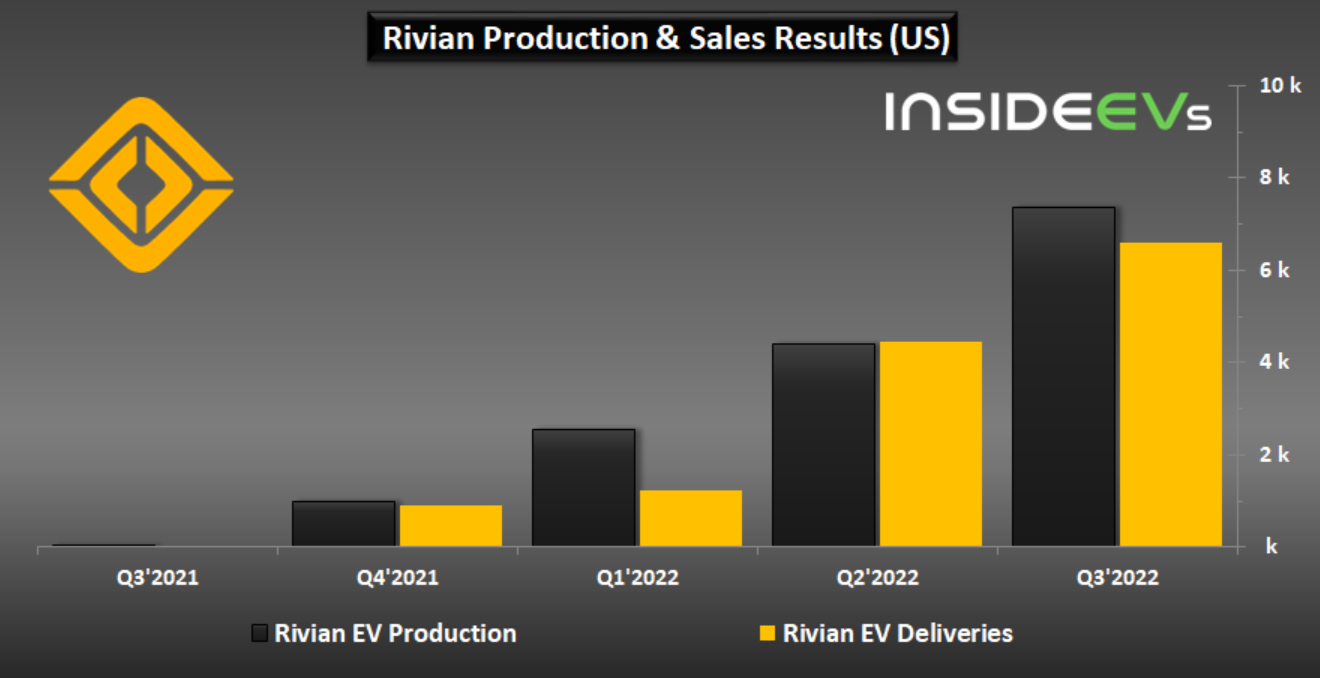 With deliveries capping at over 8,000 in Q4--that's the kind of rapid growth we want to see. In total, Rivian delivered just north of 20,000 vehicles. If they stabilize their growth rate, they have a decent shot of pushing past 50,000 car deliveries in 2023. But even 45,000 will be acceptable for our short-term PT.

We're only trying to be cagey on that growth path because of the macro environment, but we'll cover that more in a bit.

The thing to keep in mind here is that this is an issue of supply, not demand. Rivian has 150k preorders and a 100k backlog they owe to Amazon. Frankly, Rivian is being responsible by scaling at this rate as opposed to taking on way too much risk by shoving as much production out of their Illinois facility as quickly as possible.

Rivian only gets paid by the delivery though--so the next major question is: will 45,000 vehicles be possible to produce with what Rivian has on hand?

In short: yes. With the number of cars Rivian delivered vs. the number they actually produced in mind, RIVN needs to make ~55,000 cars to meet our delivery needs. This barely exceeds Rivian's estimates of 50% of what their Illinois factory can produce in a year.

So, Rivian is growing responsibly and they have all the resources and plants they need to keep that growth going. So why on earth is the stock still down so bad this month?

Well, in short: 2023 is most likely going to be a bloodbath for the EV industry.

Inflation is still here mucking up the whole economy. Furthermore, if Jerome Powell puts us in a full-blown recession to stave off inflation, more capital will flee companies like Rivian and return to safer assets. On top of all that, Elon Musk just tightened a noose around the whole EV industry by being first-to-the-party at reducing Tesla prices.

All of this comes at a time when investment in renewable energy is going to skyrocket on the heels of the Inflation Reduction Act. Why does that matter? Materials. Making EV motors, batteries, solar panels and anything electric requires the same set of metals: Nickle, Cobalt, Lithium, etc. With every major motor company leaping into the EV space--materials costs are going to pop--at least in the first half of 2023.

This is the other major reason investors are staying on the sidelines with Rivian. It's hard to see who can manage costs effectively, and who will languish under spiking costs.

But we're riding with Rivian on this--mainly because they're sitting on $18 Billion in cash and clearly demonstrating that they are using it to grow the right way as opposed to too aggressively.

With vehicle purchases and reduced expectations for margins (just to be conservative), our estimates put Rivian at being able to run operations until the second half of 2024 before they need to raise money again. Their current valuation prices in the fact they will need to raise another round, but our estimates are putting that round coming a little earlier than other folks.

Regardless--2024 is a way better time to be raising money than 2023. If we hit a full recession, it will be milder than what we've experienced before. 2024 is plenty of time to get the bull run going again, and if the Fed caps rates raises and starts lowering them in early 2024--then that's a way better environment for raising money.

Because of this--we expect to see Rivian survive 2023 and really start thriving in 2024. We're not calling this the bottom of Rivian's doldrums--but we are expecting the stock to improve long-term from here.

Again--Rivian and the rest of the EV industry could see a lot more pain moving forward--but long term this is more of a dip as Rivian gets more and more confident about finishing production and making deliveries.

There are lots of EV companies overleveraged and easy to outmatch--but Rivian's B2B model with their Amazon contract is a fairly brilliant way to ensure growth and expand their pipeline moving forward.

Sometimes just surviving a bad year is enough to outperform. The EV market is on a strong road to recovery and 2023 is going to be a big proving ground for companies like Rivian.

We're really excited to watch them pull it off across the next year.