Is This Company About to Beat SpaceX?

The end of the year is a time for us to make our big predictions for 2023.

And for us, the improving macro environment has us really bullish on some of our early picks that got hammered this year.

Chief amongst those is our oldest Space holdout: Rocket Lab ($RKLB)

We said it earlier this year and we'll say it again -- we absolutely love this company.

But what we've seen from this company this year is an organization that is committed to winning the long-term space race from every angle.

After a strong investor day last quarter -- Rocket Lab has finally put together a lot of the biggest fundamental pieces to get them to massive upside in both revenue and profitability.

After their first launch from their new American facility last week, we see a small launch provider that is set to 3x the number of launches they do a year very rapidly.

Electron is About to Triple:

Rocket Lab's workhorse, the Electron rocket, is set to launch its 30th launch in 2 days.

This is significant for a lot of reasons.

First, it means that RKLB has managed to keep the pace of launches high and growing YoY even in this downturn. More importantly, it is RKLB's first launch from their dedicated launch site in Wallops Island, Virginia.

This means in 1 year, Rocket Lab has basically tripled its launch sites. They have a new one at their New Zealand launch complex as well.

For a company like RKLB, volume is going to be a huge part of their breakout year next year. Three launch sites where they can prep the final stages of their rockets free up a lot of factory space to keep building new ones.

And this isn't even taking into account RKLB making rapid progress on their second Virginia launch site, which should be complete by 2024

More importantly, RKLB's Virginia facility also gives them way more access to take on more contracts from the US Department of Defense and the US Space Force.

These agencies are a huge part of RKLB's ever-growing backlog as they prove reliability and rapid iterability.

All of this adds up to a future where RKLB can be churning out 130 launches/ year by 2030. For context, Rocket Lab had a historic year in 2022 with just 10 launches/year.

Rocket companies have a bad habit of giving us really lofty goals on long timelines like that though, so instead, we're looking for a shorter-term goal of 35 launches/ year by 2026.

This is both achievable and a strong demonstration of RKLB's ability to progress toward their target financial model: 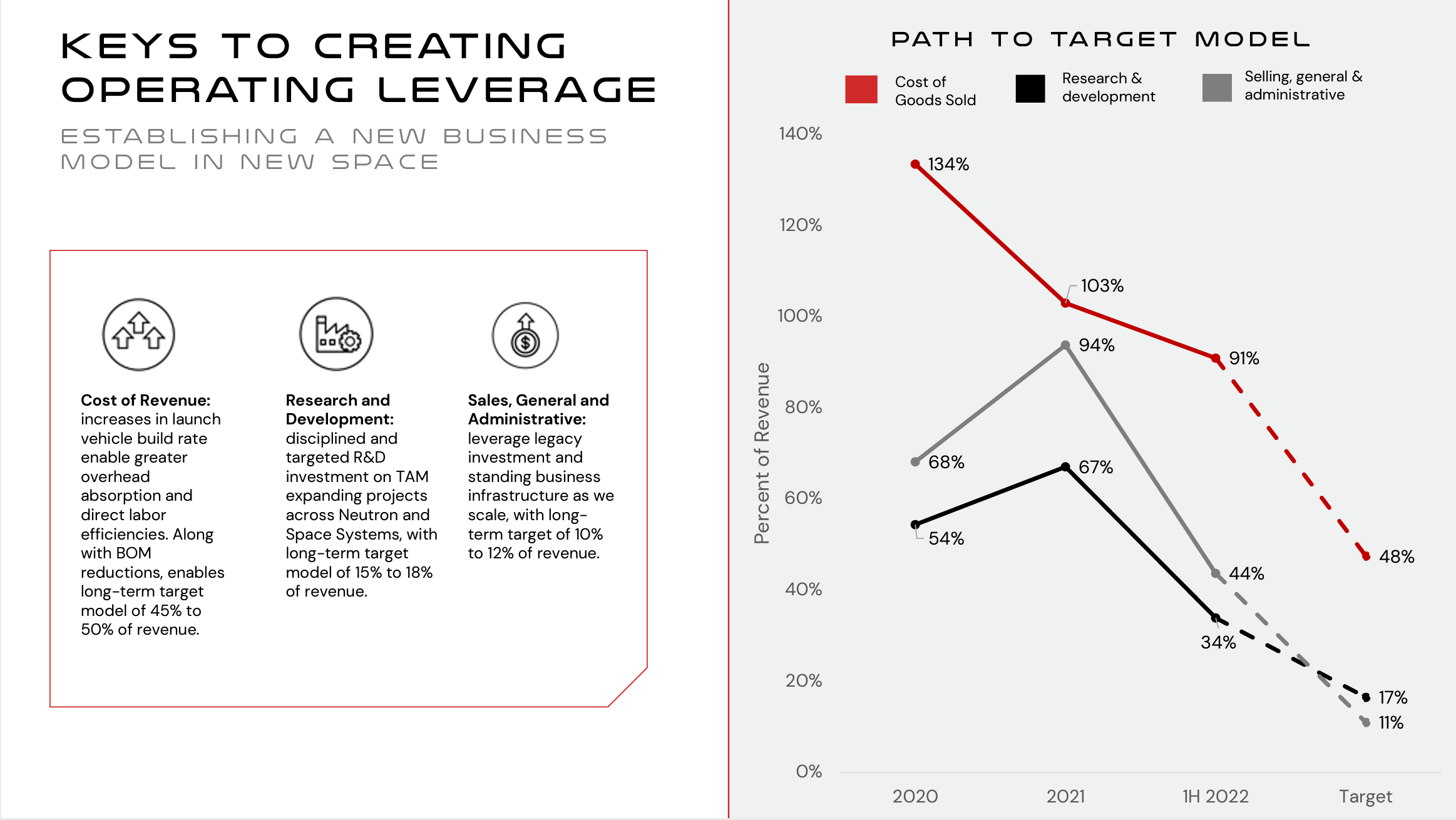 Electron may not be the sexiest part of RKLB or the entire space industry, but it is set to be the high-volume, responsive workhorse of the industry's mid-tier. Electron sent a small satellite to the moon this year, this little rocket has a lot more in reach than the market is giving it credit for.

Neutron is On Schedule:

But this whole model is moot unless RKLB can deliver on their Falcon 9 competitor. And Rocket Lab's latest earnings report gave us a lot of confidence in that regard.

The two most important components of any rocket are the engines and the fuel tanks.

RKLB has unveiled both of those for Neutron this year. The primary components of RKLB's Archimedes engine have been printed and the company is set to start larger-scale manufacturing and testing at NASA facilities throughout 2023. Furthermore, Neutron's factory in Virginia is ahead of schedule.

Neutron is slated for a 2024 debut. Initially, we saw that as a bit of a pipedream and hung all of RKLB's coming growth on space systems and vertical integration.

Rapid production of Neutron will keep RKLB miles ahead of competitors like Relativity Space, Astra, and Firefly. Applying the same mixed manufacturing to Neutron will get them to solid launch capacity by 2025.

We really like what we see as RKLB sets up Electron as a solid foundation for them to head to the stars with Neutron.

RKLB will go through a bear market and/or recession like the rest of the economy and come out soaring by Q3-Q4 2023. We'll be averaging down through whatever bottom RKLB sees--because the mid-2020s could not be brighter for this company.

Satellites, space systems, and other small services will still carry them through the first half of 2023. So if you look at RKLB's price and feel a little nervous about buying a stock that cut 20% in a single week, then bookmark this post and come back in Q3 of 2023 and check if RKLB has made any of the positive progress we've described.

Q2 2023 is a strong benchmark to make sure that going full-stack is the right move for RKLB and even if this recessionary environment deepens, there should be some positive motion in revenue and cost-cutting by then.

This is the cool part about being long-term investors. We like averaging down into RKLB despite the fact we initiated our first position right at the top of the last bull market (basically). 5 years from now, that timing will be irrelevant.

Rocket Lab is building a 30-year dynasty on the back of pitch-perfect vertical integration at a semi-decent time. We're really excited to get in on the ground floor here as the space market starts really opening up.