In a market as down as this one, it’s wild how much Moby’s Pharma Guy has been knocking it out of the park.

We’ve nailed our short-term thesis on Biogen, and Merck has been a foundational standout.

And for the second time this year, Eli Lilly is cruising past our price target — 9 months ahead of schedule.

And the good news just keeps coming for Eli Lilly, which may just be sitting on a generational blockbuster drug with Mounjaro and the rest of its Diabetes/ Obesity treatments.

We’ve talked about it before, but let’s sum up what makes Mounjarno such a revolutionary treatment.

Mounjaro is designed to treat type II diabetes by working with hormones your pancreas already produces. It helps two hormones at the same time — effectively giving your body the tools it needs to regulate blood sugar (i.e. treat diabetes).

The wild thing is, Mounjaro works so well for diabetes that it actually also works as a weight loss drug. Two of the biggest health crises in America right now are solved by this one injectable medicine. And the market is really starting to love it.

Furthermore, in much the same way that Eli Lilly’s trial data fueled our big bet on Biogen — Biogen’s success gives us more confidence in even more revenue coming Eli Lilly’s way in the next few quarters.

Stick around for this report y’all. The charts you’re about to see had our jaws on the floor.

There’s a lot more to discuss, so let’s just get into it below👇

Mounjaro is Even More of a Game-Changer That Previously Thought:

We’ve been hot on Eli Lilly (LLY) for a while, ever since we saw initial trial results for their type 2 diabetes drug Mounjaro (read about it here).

Last quarter we liked what we saw from Mounjaro’s initial sales numbers. But this quarter we saw something astounding.

Here’s the initial chart for prescriptions given for Mounjaro: 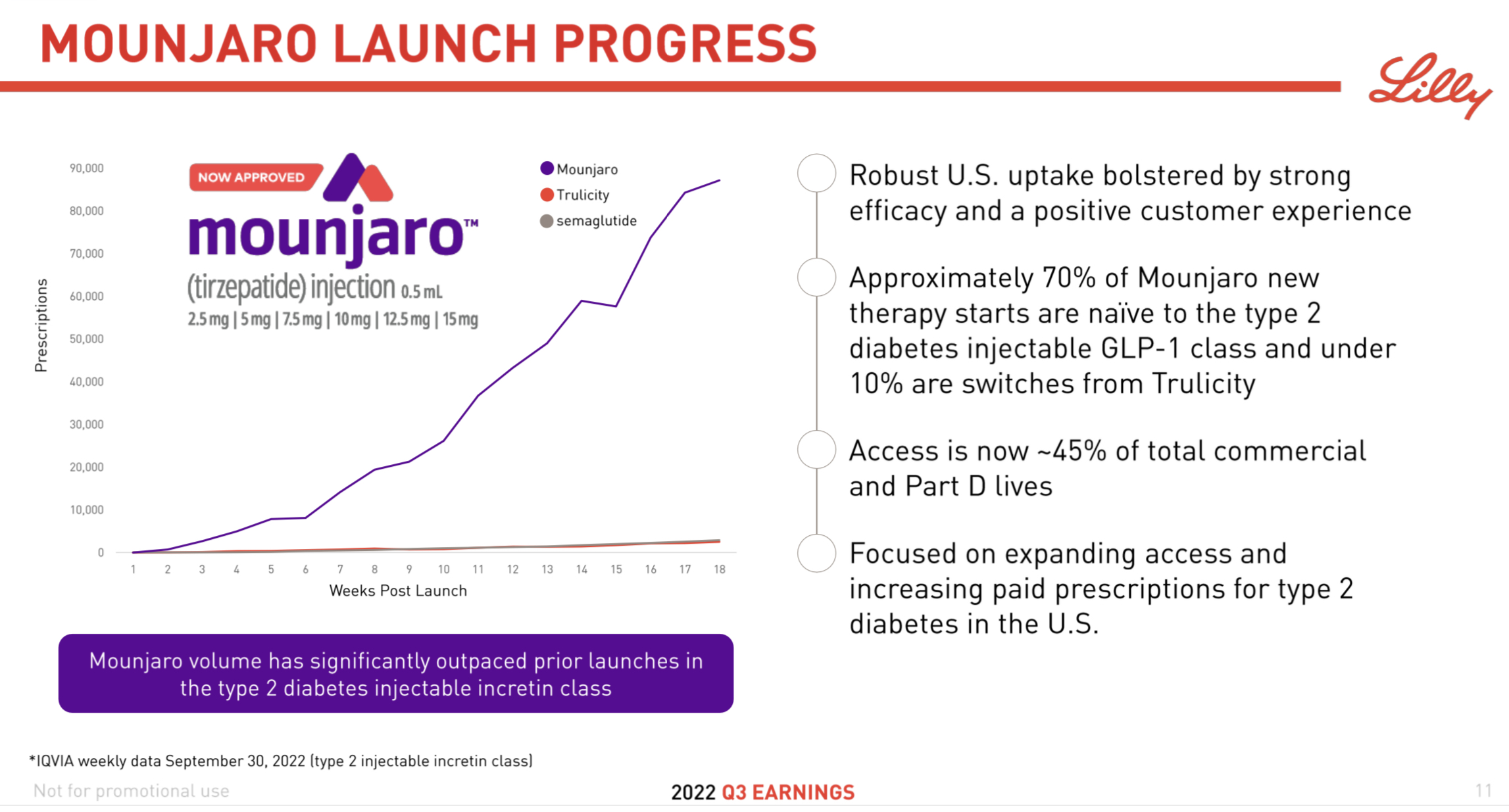 There is a very subtle horizontal line at the bottom of that graph. That’s not the x-axis, that’s the initial growth for LLY’s Superdrug Trulicity.

Really look at the scale there, that is an incredible comparison. Mounjaro just started and it’s already popping off this much.

And Trulicity is a brilliant medication that did really well to start and went off to be a gangbusters diabetes treatment in its own right.

Compare that initial prescription chart to how much Mounjaro and Trulicity are currently contributing to revenue: 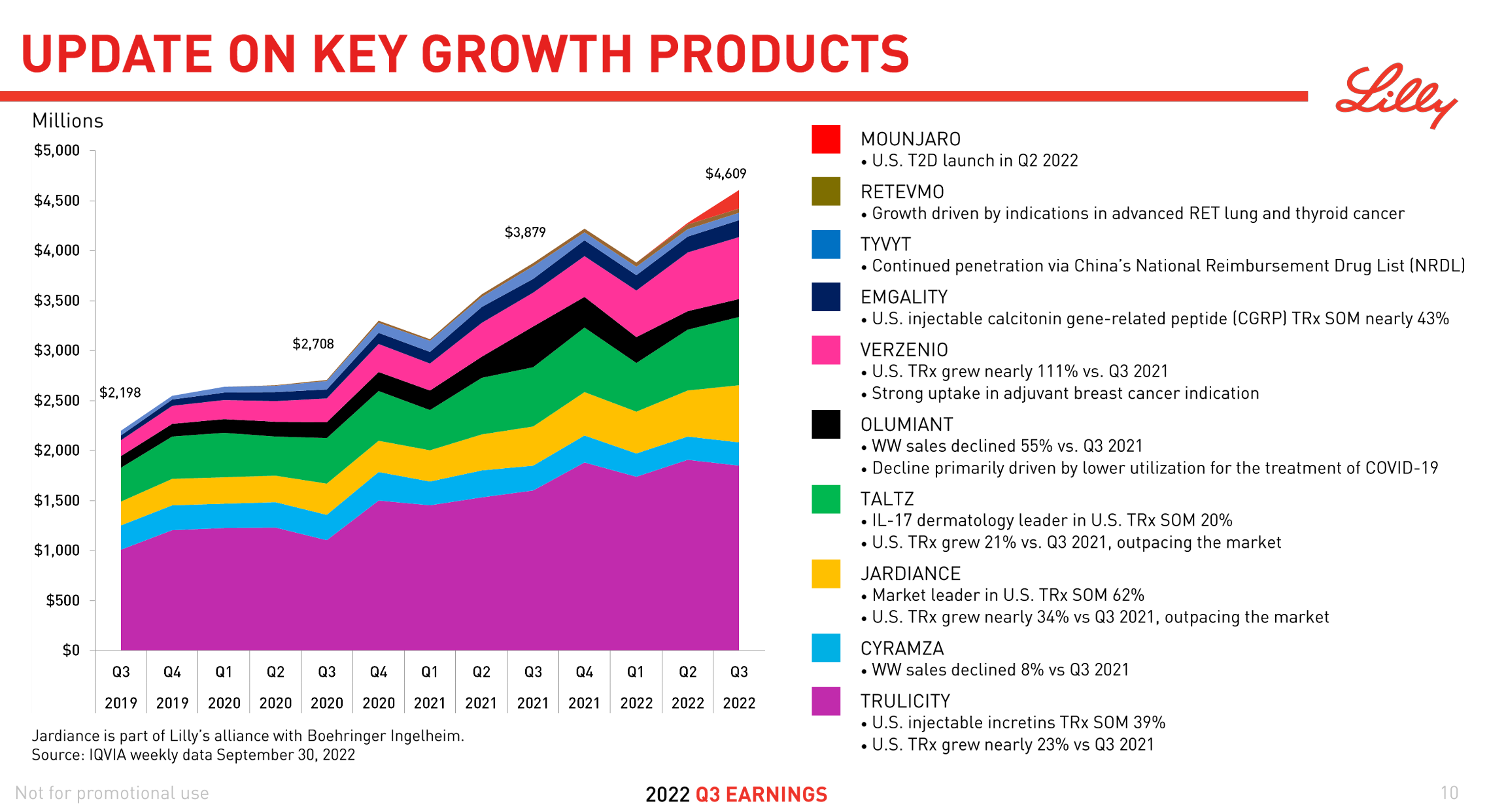 So yeah, Mounjaro’s prescription numbers are absolutely outstanding, especially with how much ground it needs to cover to catch up to Trulicity.

Mounjaro went from 0 to 90,000 prescriptions in 18 weeks. And this medicine is expected to hit peak sales of $25 billion!

But why is this happening? Is Mounjaro just so wildly effective at treating diabetes that it’s muscling out the competition or is anything else going on?

Let’s double-click into who’s getting these prescriptions because there are some wild factors at play here.

First and foremost, patient surveys show that 33% of these prescriptions are either naive about their diabetes 2 diagnosis (this is way more complicated than it sounds) or they are receiving this prescription “off-label”.

33% is a huge number, way bigger than we anticipated. We’ve been waiting for a figure like this for a long time because there are a lot of circumstantial reports going around about the huge number of doctors prescribing Mounjaro “off-label” to help folks treat obesity while the FDA works on approving the drug as an official obesity treatment.

And this 33% of 90,000 figure finally gives us a concrete-ish number to work off of. If it was just new diabetes patients, we might see this number be 8-18%. But 33% suggests a very large ‘off label’ population and therefore a lot of on-the-ground confidence in the drug as an obesity treatment.

Eli Lilly’s stock has been up big on revenue gains from their last earnings call — but approval on obesity would send the stock into the stratosphere.

Don’t forget, in our initial report we showed you preliminary trial data from LLY that demonstrated weight loss of up to 22% for obesity patients.

That’s the same efficacy as stomach stapling. Results like that almost always decrease as trials expand, but even half of that efficacy in an injectable drug is an absolute game changer.

Remember, upwards of 85% of Americans are overweight or obese. That can be chalked up to how bad of a measure the BMI is — but no matter what we have a growing health crisis in this country tied to weight and diabetes. Mounjaro’s skyrocketing prescription numbers are a testament to how desperately our healthcare system has needed a weapon as powerful as this.

Our final figure is that these numbers only represent a 45% penetration of the market.

Mounjaro, is already growing like wildfire and it’s only being prescribed to half the population of half of its potential uses.

We probably won’t get more news about Mounjaro’s approval for obesity specifically until Q1/Q2 next year — but we’re hoping to get more off-label data before we update their price target again.

However, a similar drug from Biogen demonstrated actual clinical efficacy for reducing actual symptoms of Alzheimer’s—so that gives us a lot of confidence about LLY’s Donanemab trials. Again, this is frankly having your cake and eating it too with these Mounjaro numbers—but the stock is likely to rise further as more Alzheimer’s data gets released.

If you want more context, check out our article on Biogen here. Basically, there was evidence that showed that drugs like Donanemab were basically treating the wrong thing in the brain–treating a symptom of Alzheimer’s and not the underlying cause. Donanemab’s phase III trials showed that it actually improved cognitive function in Alzheimer’s patients, which gave us a little confidence.

Then Biogen released results that showed their drug (which treats the same symptom) is also effective at treating Alzheimer’s symptoms. Biogen popped off on that news, and Eli Lilly stands to benefit from the same context.

Now that Donanemab is entering the regulatory review phase of its clinical trial, we’re really close to a potential approval of the drug and a major unlock for LLY’s portfolio.

One big thing about this is that LLY’s revenue got hurt pretty badly by the macro environment. The strong dollar pummeled their numbers, but that barely even tempered the bull sentiment surrounding the stock.

LLY is looking like an absolute kingpin stock and we’re genuinely excited we got in when we did.

We’re aggressively raising our price target in anticipation of more news about their development!

Want the full Moby experience? Our annual premium offers news, alerts, earnings, IPO calendars and more, including the Ultimate Investing Course (at a value of $99.99USD) to help you invest smarter. Save 45% with our Annual Premium – billed at $199.95 USD/year.

Ready to start making better investment decisions? Join our monthly premium today with access to research, reports, and more for only $29.95USD.