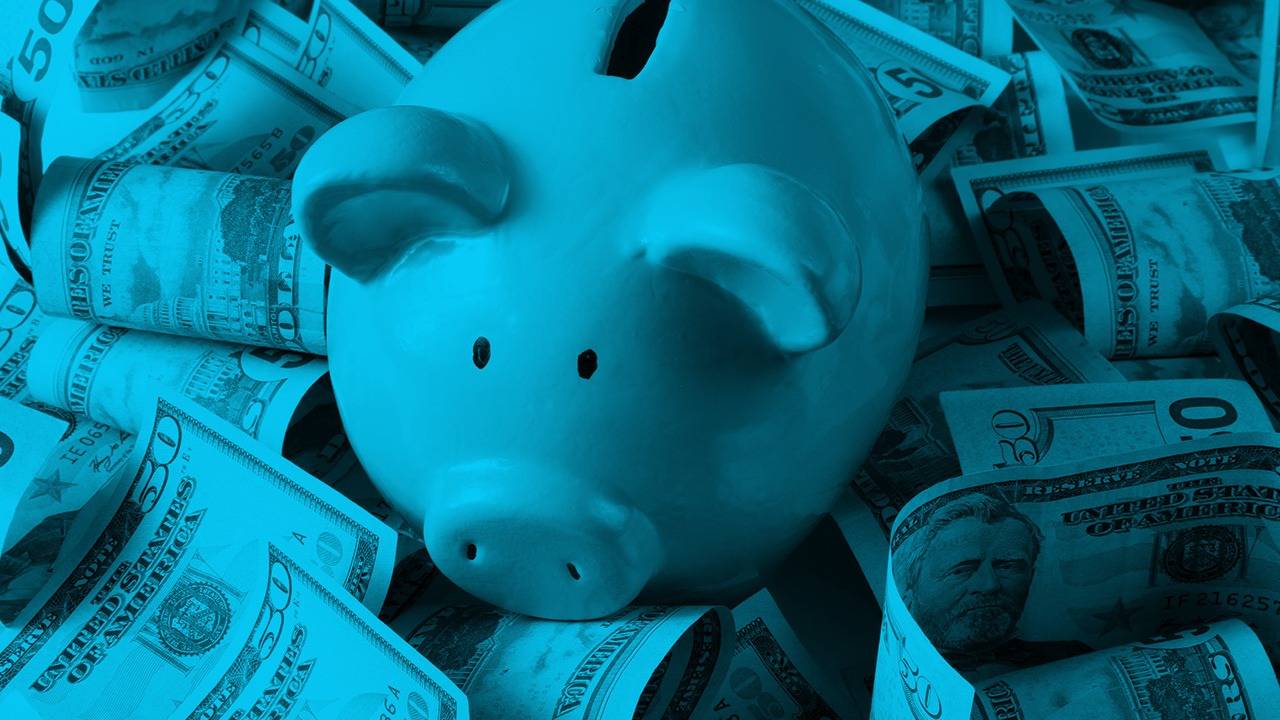 Welcome back to this month's edition of the Flagship Dividend Portfolio!

As we told you for the last five months, if you have been following along with the Moby Flagship Quantitative Dividend Portfolio, you should have continued to outperform the market while receiving over a 4% annual dividend.

If you're new to this strategy, the way it works is that we use AI & algorithms to build and manage a portfolio for you.

We have several different portfolios, but for this portfolio, the goal of it is to produce strong & stable returns over the long term with passive income via dividends.

And when we see that not only is it delivering on that goal, but it's also outperforming the benchmark, we're truly excited to be able to help you achieve financial freedom.

And as we told you last month, this portfolio is not aimed to return over 15% per month. That's because the market has returned about 10% per year, on average, for the last century.

And the goal of this portfolio is to outperform the market while taking on less risk.

But at 6.5x the performance of the market (at an annualized rate) -- that type of consistent outperformance is likely impossible for our level of risk.

Having said all of this, we're very happy with the 3-month performance of 16% 😀 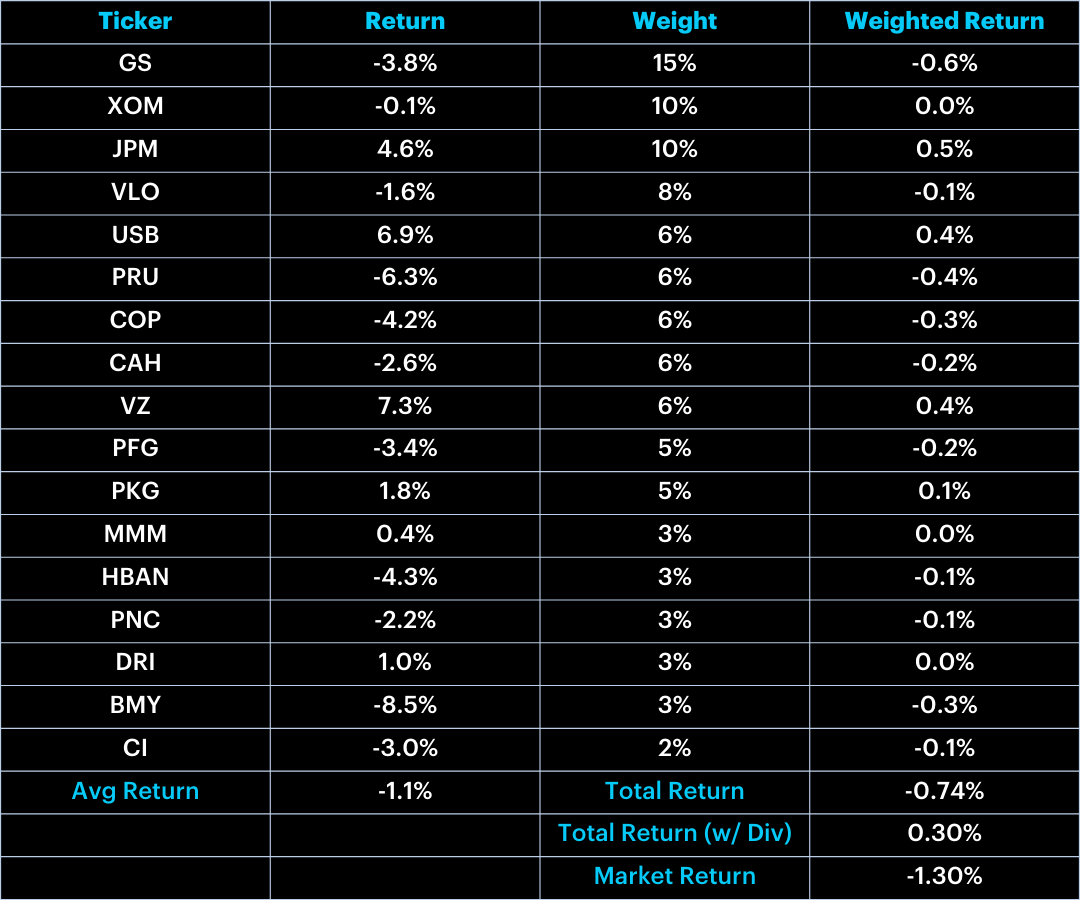 This month, the portfolio fell back to reality as the markets had a very hot and cold two months.

The average return was -1.1% which was in line with the market return of -1.30%. Therefore, our takeaway is that our stock selection is what gave us our outperformance over the market this month.

However, when double-clicking into each stock, we see a trend beginning to emerge that stands out. And the trend we're seeing is that stocks are starting to stray away from their peer group.

This is something we've talked about before but for those of you who are new here, what we mean by this is, no longer is an investment in an entire sector, an "investment strategy".

That's because while financials could do well in a given time period, all of the financials that comprise that index will start to deviate away from the average.

Look no further than Goldman Sachs vs. JP Morgan. They both look similar on the surface yet had wildly different performances.

That's because in times of pullbacks, unique business models shine, and JP Morgan's was clearly more adapted to a slowdown in economic activity.

You probably wouldn’t know it, but many of these major US banks operate very differently than others.

For example, JP Morgan makes a ton of money from its wealth management & retail divisions while Goldman Sachs derives a majority of its revenue from its investment banking division.

And over the last year, deal activity slowed down drastically! So much so that Goldman’s quarterly profits are down $1.33 billion -- which is -66% from a year ago.

Long story short, the slowdown in deals has massively impacted Goldman’s bottom line while JP Morgan's haven't been affected "as much".

While we’re anticipating for deals to start picking up this year/next, this just paints the picture of how stock selection becomes more important than ever as you need to understand the nuances of businesses within the same peer groups.

In any case, our algorithms are unbiased. They pick stocks based on a wide array of credentials and hold them indiscriminately as long as their financials stay intact.

If you have any questions on how these work, please reach out! If not, let's dive into this month's changes. 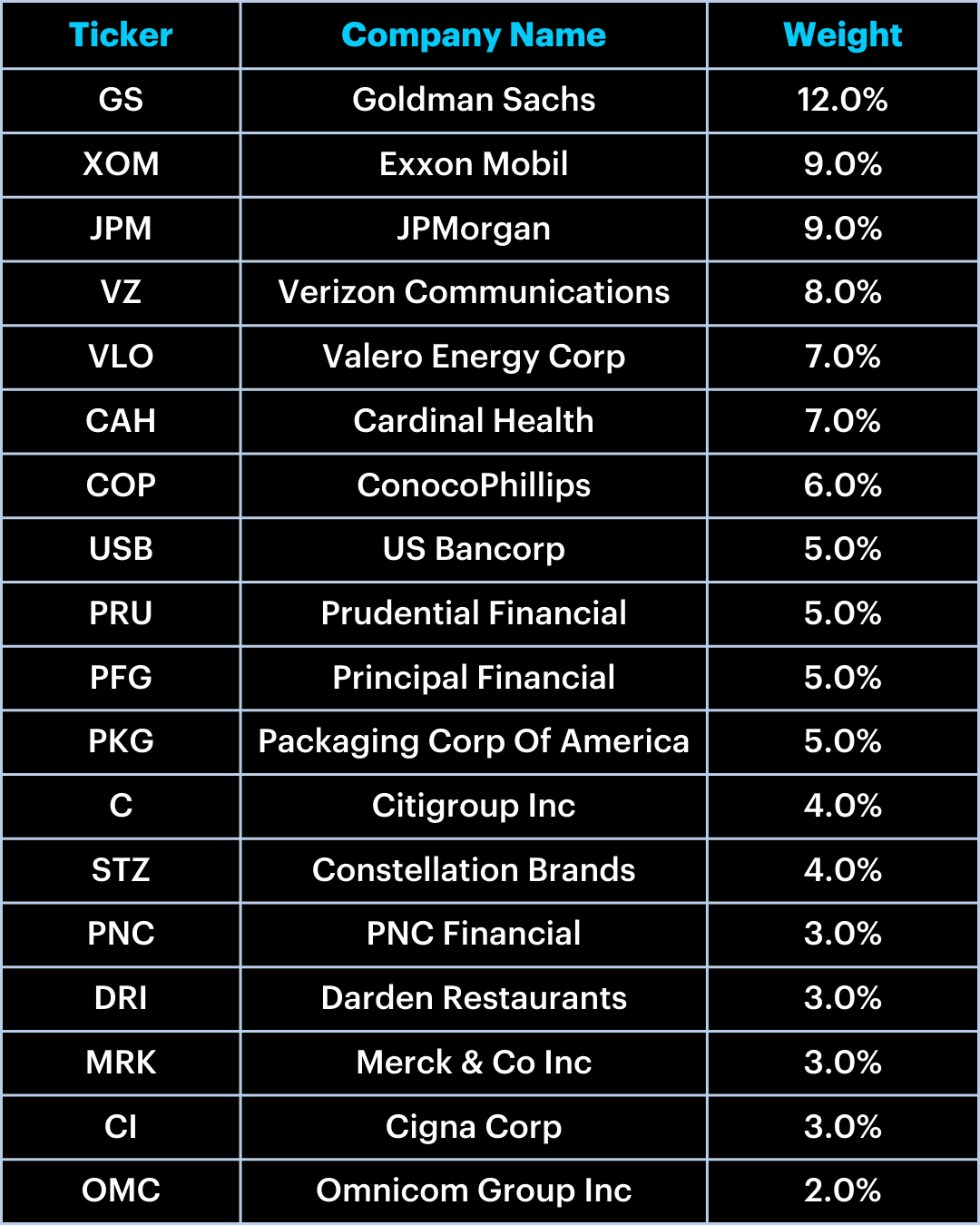 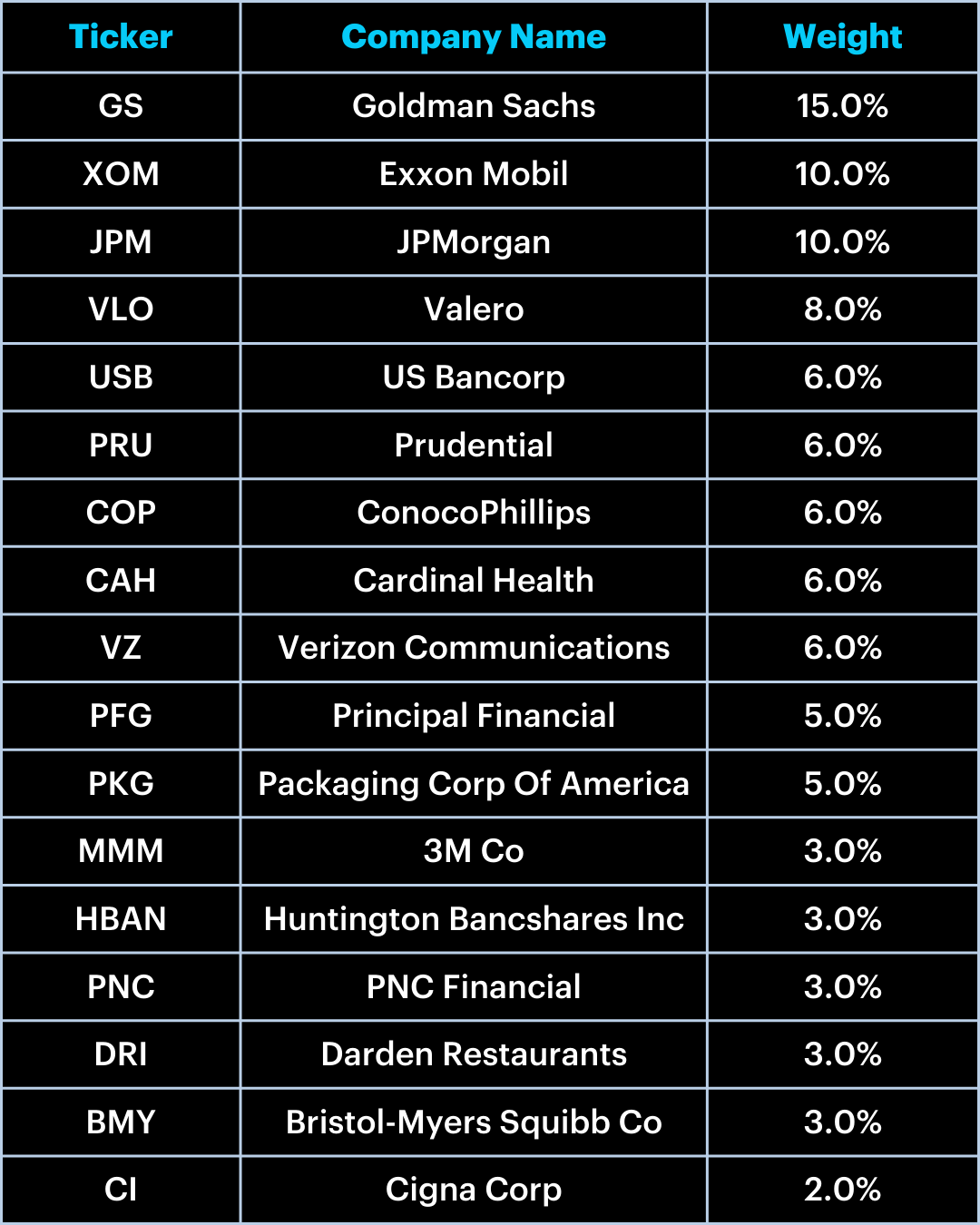 This month, most of the changes came via the weightings albeit the algorithm made 3 wholesale changes.

Fortunately, outside of this portfolio, we've covered STZ before. If you want to read more on it, just click: here.

And while we won't dive into the specifics of each company, the general gist is that our algorithm looks for companies with a strong dividend and a clear opportunity for driving margin expansion.